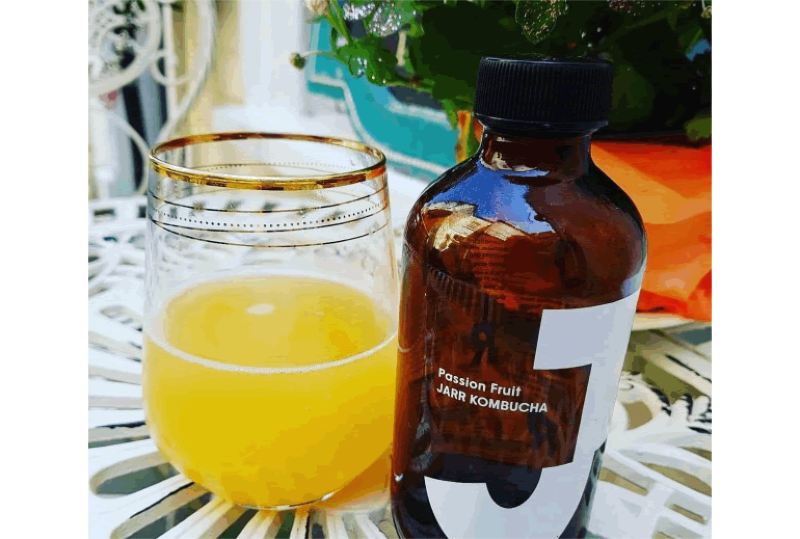 If you’ve been side-eyeing that strange drink which appeared recently in your local supermarket aisle, you are not alone. As kombucha is slowly becoming part of the mainstream consciousness in the UK too, we’ve decided to order a case of the stuff, from JARR KOMBUCHA no less and start “investigating”.  JARR was co-founded by a Californian named Adam Vanni, who took a leap of faith and moved to London 2 years ago to start a kombucha brand with his beer-brewing friends. The leap paid off, and now Jarr is perhaps the most recognized kombucha brand in all of the U.K. Their microbrewery, offices and taproom are located in Hackney Wick, a 19th century East London industrial community turned thriving artistic and creative hub. Making kombucha is a slow and nurturing process - they use a 50/50 blend of organic Sri Lankan grown Sencha green tea and Taiwanese Oolong tea. Then a symbiotic culture of bacteria and yeast (looking like a mushroom or rubbery pancake and affectionately called SCOBY) is added making kombucha’s fermentation magic happen and giving its naturally sweet and bubbly taste and tawny, cloudy appearance.

So is kombucha a keeper?! Some of the health claims are:

- It boosts energy and immunity

- Supplies vitamin B and antioxidants

- Improves digestion by adding beneficial bacteria to your microbiome.

Ok but what does it taste like?! Well, apparently the thing inside is alive so when I opened my first bottle I wasn’t sure whether I should say “Hi”... and yes, it’s true, you definitely must acquire the taste as it’s surprisingly tart, sour and vinegar-like to start with. But if you don’t love it from the beginning, give it a second chance. You’ll grow into the refreshing, fuzzy bubbles which will tingle in your tummy and you’ll never look back - next thing you know, you’re gently addicted...

About its sugar content - the sugar feeds the SCOBY so after the fermentation time there are only traces of sugar left. Which is great.

About its alcohol content - the yeast do produce alcohol but the bacteria in the culture turn the alcohol into organic acids so only minute quantities of alcohol, typically less than 0.5% volume remains. Sorry.

The JARR Kombucha brand we have here at Tea Inc. values quality, consistency and flavour. They have refined their recipes over the past 3 years to bring you the best beverage they could possible brew. For that reason, their hard work has been recognised by the Guild of Fine Food and have received a 2 star Great Taste Award for their Ginger Kombucha and a 1 star award for their Passionfruit Kombucha.

Enjoy it instead of sugary soft drinks or in place of alcohol when you don’t feel like boozing. Alongside our non- alcoholic wines from Belvoir, Kombucha fits perfectly into of our new “Soft drinks for grown ups menu”. Do try it for yourself and get boochin’!

Check out the selection of fine teas served in both our Devizes and Marlborough shoppes.

This is a haven in Marlborough with fantastic coffee and great loose leaf tea! The Salmon bagels are excellent and the staff are incredibly friendly and helpful in which tea to choose. Loved it! Thanks Tea inc!